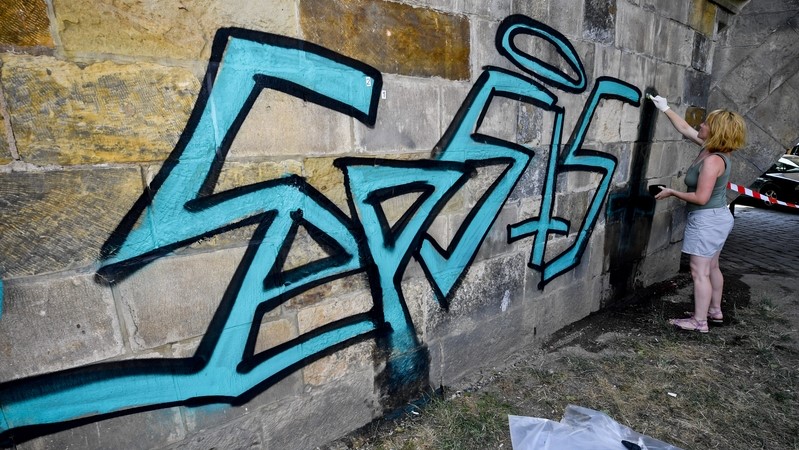 Prague, Czech Republic – An unidentified person has reportedly removed the giant graffiti on Charles Bridge even though restoration experts had already started working on it.

Looks like someone was a bit too eager to restore the Charles Bridge’s former glory: as local media reports, an unknown person removed, on Saturday night, the large graffiti spray-painted by two Germans earlier this month on one of the pillars of Charles Bridge, an incident that caused indignation in the country over one of its most beloved monuments and Prague’s most famous landmark.

This new mysterious development appears all the more mind-boggling considering a team of restoration experts had already started working to remove the graffiti on Friday. One can easily imagine their surprise when, coming to work the following day, they discovered the graffiti was already gone.

The identity of the anonymous cleaner remains unknown, and no one has claimed responsibility, according to the Road Administration Authority (TSK).

Although the amateur restorer might have meant well, the job sadly appears to have been botched, according to experts.

Jan Mjartan, the restorer heading the team of experts in charge of removing the graffiti, said that they’ll nevertheless have to finish the restoration, and would also have to run some tests to identify which substance and chemicals were used, and determine whether the express clean-up harmed the centuries-old bridge.

After being arrested on the scene, the two young German vandals who spray-painted the graffiti were given a suspended sentence, a hefty fine and were banned from entering the Czech Republic for a period of five years.