Brno, Czech Republic – The final list of candidates for Ursula von der Leyen’s European Commission was revealed after weeks of backbreaking negotiations, and final preparations are currently under way to allocate the portfolios to each nominee.

As usual, every EU member state gets to pick one candidate for the post of EU Commissioner, with each nominee heading a different key department of the bloc’s executive. For example, Cyprus’s nominee will be spearheading the EU’s health policy, while Ireland’s pick will be in charge of trade-related topics and Greek’s candidate will be heading the controversially-named “European way of life” department (which includes the hot button issue of migration).

Of particular interest are the picks from the members of the Visegrad Group, which fully endorsed the election of Von der Leyen as the next EU Commission president.  Let’s examine more closely the candidates picked by the Czech Republic, Hungary, Poland and Slovakia to represent them – although, technically, EU Commissioners aren’t supposed to represent their country’s interests – in the next bloc’s executive.

Certainly not a newcomer to the EU policy area, Mr. Sefcovic is currently serving as the vice-president of the European Commission for the Energy Union (since 2014), and has had several top posts in the same institution, as the commissioner for Education, Training, Culture and Youth (2009-2010) and vice-president for Inter-institutional Relations and Administration (2010-2014), which he seems to be set to continue from 2019 as the vice- president for Inter-institutional Relations and Foresight.

Originally from Bratislava, he studied economics and later moved to study International Relations at the Moscow State Institute of International Relations from 1985 to 1990. In 2000, he acquired a PhD in international law, basing his thesis on EU law and its legislative procedures. He later served as a diplomat and ambassador. He spent the last five years overseeing many critical issues, mediating, for instance, to a standoff over gas supply between Russia and Ukraine. His project for a European battery alliance will remain under his leadership even after his change of posting.

With years of diplomatic experience, there’s no doubt that his qualifications for a top post in the EU are there. His reputation and standing in EU circles was, however, seriously undermined after his failed run for the presidency of Slovakia earlier this year and his populist, Eurosceptic rhetoric used between the first and second rounds, blatant electioneering that contradicted his decades-long career and commitment in Brussels. 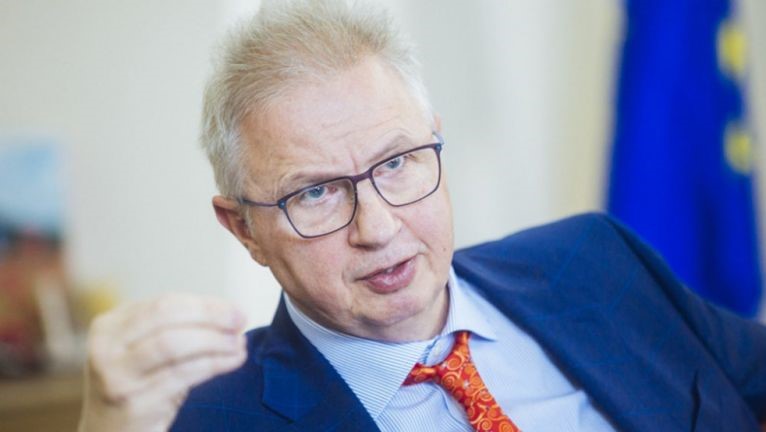 A career diplomat, member of the ruling Fidesz party and former ambassador of Hungary, Trocsanyi has qualifications in other areas as well. Having served as a member of the Constitutional Court of Hungary and Minister of Justice, Trocsanyi , who has faced strong criticism for playing a key role in Hungary’s democratic backsliding and in crafting a number of controversial laws that put Budapest at odds with Brussels, would have been an interesting and highly risky choice for Von der Leyen. His nomination to take charge of EU’s Neighbourhood and Enlargement policy, a key issue for Hungary’s influence in the Balkans, was however rejected by the European Parliament, citing possible conflict of interest. MEP’s also put their veto on Romania’s pick.

According to analysts, his nomination was made to ease tensions between Hungary and the EU, as Orban has been butting heads with both the Parliament and the Commission for several years now. But Trocsanyi’s role in criminalizing the work of NGO’s supporting refugees or forcing the Central European University to leave Budapest, among many other controversial points, has made his rejection by the EU Parliament an expected move. According to the most recent news, Hungary will instead put forward diplomat Oliver Varhelyi’s name for the post of EU Commissioner.

A former judge, member of the Polish Communist party and currently a member of the ruling Law and Justice (PiS) party, Wojciechowski has been a member of the European Parliament for a while. He replaced Poland’s previous pick for EU Commissioner, Krzysztof Szczerski, who dropped out of the race after Poland was allocated the portfolio for agriculture – having spent a large amount of his tenure in the parliament as the vice-president for agriculture, Wojciechowski appeared to have much better qualifications. In 2016, he joined the European Court of Auditors.

One of his main tasks will be to finalize the reform of the EU’s Common Agricultural Policy, the second largest part of the EU’s budget and a critical source of funding for Poland. Like Trocsanyi, he was investigated for fraudulent use of travel funds during his tenure as MEP, but recently secured a fraud reprieve from the EU’s anti-corruption agency OLAF. Although Wojciechowski’s candidature wasn’t rejected, Poland is also facing criticism for democratic backsliding, just like Hungary. Wojciechowski will therefore have to attend hearings related to the matter and navigate in troubled waters as the stand-off between Brussels and Warsaw doesn’t show any signs of calming down.

Currently EU Commissioner for Justice, Consumers and Gender Equality, she has  high qualifications in the public European sector and has long been slated as one of the most powerful women in the EU. She also spent 33 days in prison in 2006 after being falsely accused of corruption. A former member of the Czech Social Democratic Party, she joined the ranks of the ruling ANO party of Prime Minister Andrej Babis in 2012, having secured high popularity ratings and helped secure ANO’s victory in the elections.

As EU Commissioner, Jourova has been on the front-line of many hot button issues in the last few years: she positioned herself as an vocal proponent of food equality in the EU, spearheading an investigation into the matter of dual food quality in Europe, especially of foods of lesser quality sold in Central and Eastern Europe. She also forced Airbnb to change their terms of service to comply with EU standards.

This, along with other decisive issues like the protection of whistle-blowers, gained her incredible popularity throughout Central Europe and in her home country, a recent Forbes ranking placing her as the most influential woman in the Czech Republic. For some, all these credentials make her a perfect pick for the portfolio of Values and Transparency. Others, however, remain sceptical that an ally of Czech Premier Andrej Babis, under investigation for conflict of interest and EU subsidy fraud, should spearhead the bloc’s transparency efforts. Whichever way, Vera Jourova may prove to be one of the top people in von der Leyen’s Commission.

It’s obvious that the nominees from Slovakia and Czechia are here to stay, as their past successes and relevant experience make them easy picks to tackle challenges faced by the Commission. On the contrary, Hungary and Poland still face scrutiny regarding their democratic backsliding, and their nominees will play a key role, both formally and informally, in possibly bridging the gap and easing tensions between Brussels and Central Europe – or the opposite. What better way to improve EU relations with the V4 than to excel at a top job within the Commission, making their successes and achievements noteworthy not just for Brussels, but also for their home countries?

2 comments on “Who are Central Europe’s picks for EU Commissioners?”