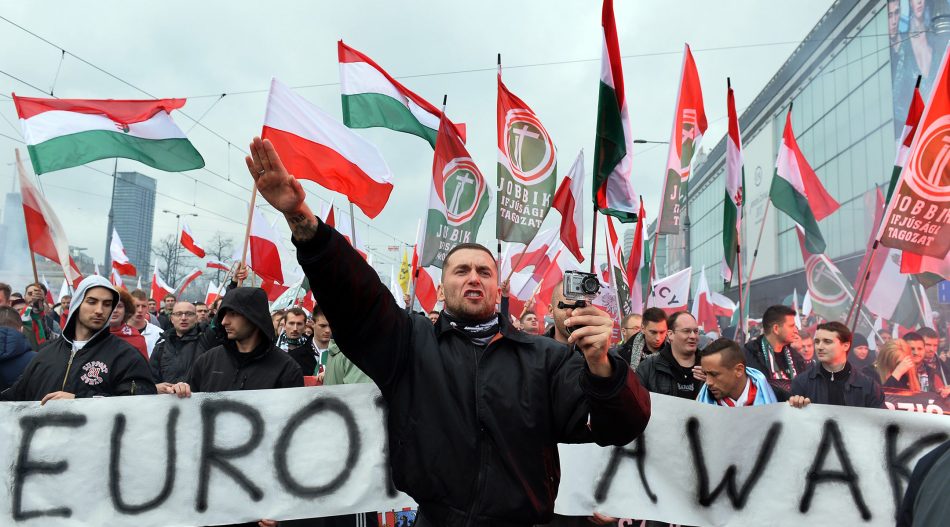 Warsaw, Poland – The latest global survey conducted by the Anti-Defamation League (ADL), an international Jewish non-governmental organisation based in the United States, finds that Poland and Hungary are among the countries in Europe where anti-Semitic attitudes are the most prevalent.

On the other hand, despite recent reports claiming that anti-Semitic acts have been steadily increasing in the Czech Republic, only 13% of the population is believed to harbour anti-Semitic attitudes. The study found that the European country with views least hostile to Jews was Sweden.

The survey also found that 21% of Poles and 17% of Hungarians believe the Holocaust happened, but that the number of Jews who died in it has been greatly exaggerated by history.

Furthermore, 47% of Hungarians and 48% of Poles who answered the survey said that they had an unfavorable opinion of Muslims.

“These findings serve as a powerful wake-up call that much work remains to be done to educate broad swaths of the populations in many of these countries to reject bigotry, in addition to addressing the pressing security needs where violent incidents are rising,” said ADL CEO Jonathan Greenblatt when announcing the findings.

The rise of anti-Semitism and Holocaust revisionism

These results are not so surprising. A recent study found that Holocaust revisionism is particularly strong in some of the EU’s eastern member states, especially in Poland and Hungary.

In fact, the perceived rise of anti-Semitism and Holocaust revisionism in Poland has triggered a number of high-profile controversies in recent years. The Polish governement itself is often criticised, most recently for passing the so-called “Holocaust law” criminalising the attribution of Nazi Germany’s crimes to Poland and the use of the phrase “Polish death camps”.

In February, Polish Prime Minister Mateusz Morawiecki even cancelled a trip to Jerusalem, where he was supposed to attend a summit with Visegrad Group leaders and Israeli Prime Minister Benjamin Netanyahu, after the latter’s controversial remarks about the collaboration of some Polish people with Nazi Germany.

Although the bill was eventually watered down under pressure from the U.S. and Israel, many observers highlight the continued rise of anti-Semitic and Holocaust revisionism discourse from Polish officials.

Earlier this year, while a right-wing newspaper was spotted at a news kiosk inside Poland’s parliament instructing readers on ‘how to spot a Jew’, Israel urged Poland to bar Holocaust denier David Irving from entering Poland, after it became apparent that he was planning to lead a tour of Nazi concentration camps in the country. In April, a Polish town’s Good Friday ritual lynching of a Judas effigy was also slammed the World Jewish Congress (WJC) for being a “ghastly revival of medieval anti-Semitism”.

“The Poles need to fight anti-Semitism, not pass laws denying their part in the Holocaust,” claimed at the time a senior Israeli opposition politician.

Not all is bleak though. Thousands of Polish football supporters attending last summer’s Euro qualifier in Warsaw between Poland and Israel famously applauded the Israeli anthem after a small minority tried to drown it out with whistles and jeers.

Hungary has also had its fair share of anti-Semitic incidents in recent years, with the government itself also often being criticised, notably for its anti-Semitic attacks on George Soros, the bogeyman of the far-right movement and the governing Fidesz party.

In fact, the community centre has been targeted several times by the far right and by pro-government media who emphasise the Jewish background of the organisation, calling it the ‘Hungarian general headquarters of George Soros’.

Amidst this rise of anti-Semitism in Hungary, a recent study conducted by online genealogy platform MyHeritage revealed that the country with the highest proportion of Ashkenazi Jewish ethnicity after Israel is Hungary, and not the United States as was previously believed.

3 comments on “Poland and Hungary among the most anti-Semitic countries in Europe, says latest survey”