Warsaw, Poland – All four Visegrad countries have continued to drop precipitously in Transparency International’s annual Corruption Perceptions Index (CPI), an international ranking that “reveals a staggering number of countries showing little to no improvement in tackling corruption”, according to its authors.

According to the 2019 CPI, released a few days ago, the Czech Republic, Poland, Hungary and Slovakia all dropped in the international ranking that examines the state of corruption as perceived by different segments of the population in 180 countries around the world.

Ranked 41st worldwide in the 2019 index, tied with Cabo Verde and Cyprus and behind Qatar, Botswana and Israel, Poland loses five spots compared to last year but remains first among Visegrad countries.

The Czech Republic, which has been swept by a wave of mass anti-government protests to denounce the alleged corruption of billionaire Prime Minister Andrej Babis, reported an even sharper drop year-on-year, falling from the 38th to 44th position in 2019, tied with Georgia, Latvia and Costa Rica.

Relatively speaking, Slovakia is the best performer among Central European countries, losing ‘only’ two spots compared to 2018. It’s now ranked 59th in the world, one of the lowest scores among EU countries. Last year, the Council of Europe urged Slovak authorities to take more drastic measures and step up its fight against corruption, a topic that has taken center stage in the country since the murder, in 2018, of investigative journalist Jan Kuciak and the election, the following year, of anti-corruption activist Zuzana Caputova as president.

Ranked 70th worldwide, Hungary loses six spots compared to the previous year. Tied with Romania, Hungary is now considered the second most corrupt country in the EU, after Bulgaria (74th worldwide). Watchdog groups and international organizations have long slammed Hungary’s failure to address widespread corruption and cronyism, which critics have noted only got worse under the authoritarian tendencies and growing concentration of power of Prime Minister Viktor Orban.

According to a recent Ipsos poll, corruption is seen as one of the main issues Poles and Hungarians are worried about.

Denmark retains its top position as the least corrupt country in the world, followed by New Zealand, Finland, Singapore, Sweden and Switzerland.

According to the 2019 CPI, the most corrupt countries in the world are Somalia, South Sudan, Syria, Yemen and Venezuela.

Released every year by Transparency International, the Corruption Perceptions Index aggregates data from a variety of sources to assess the perceptions by business-people and country experts on the level of corruption in the public sector. 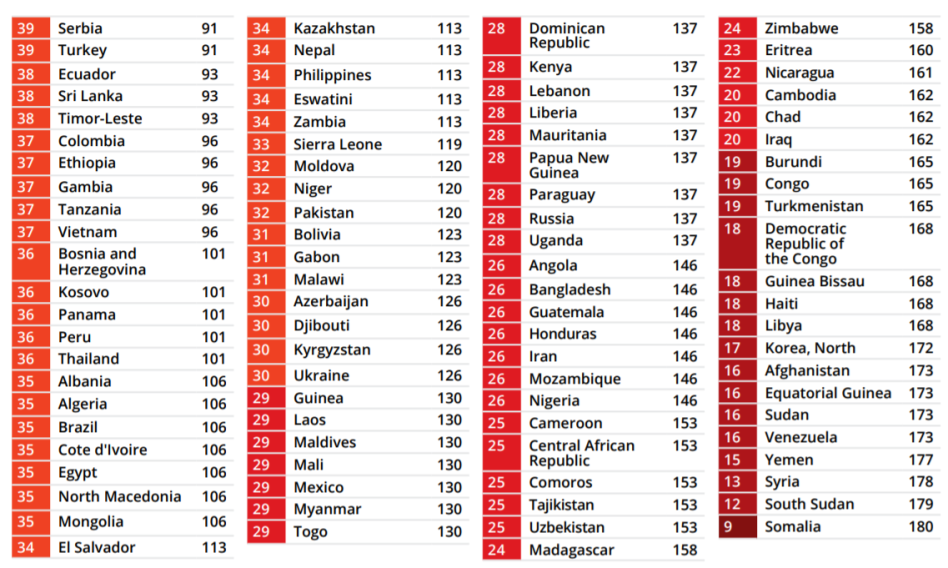 1 comment on “Central Europe continues to slip in corruption index”