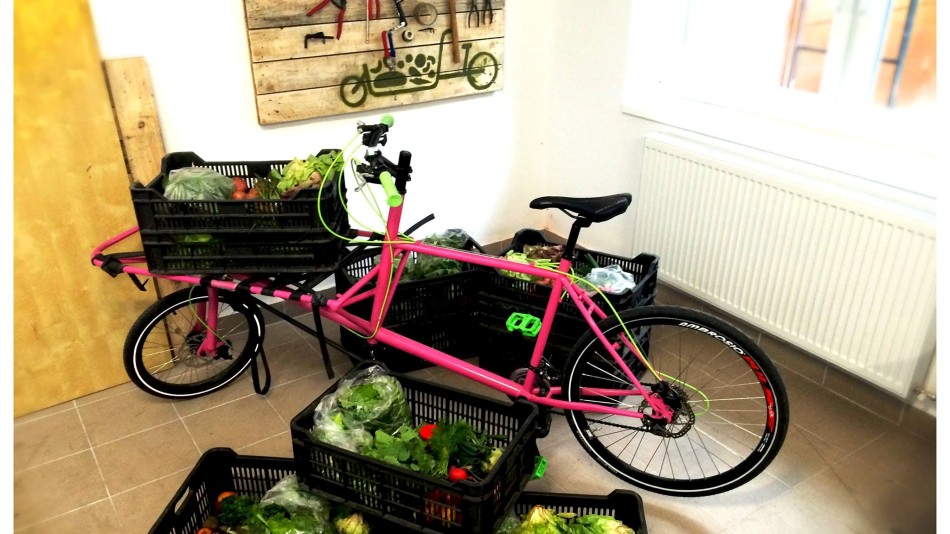 Budapest, Hungary – “Building your own furniture isn’t that complicated. There are plenty of participative workshops to learn how to do it yourself. We would have far enough material to build from in this world if we just used second-hand wood and furniture”, says Margaux, a French woodcraft engineer student in her 20’s, who is on a short visit to Cargonomia’s center in Budapest.

“Cargonomia is a physical space for multipurpose activities and volunteering in a local context”, explains Logan Stenchock, an environmental and sustainability officer at the Central European University, and one of the co-founders of the Hungarian organization. It’s also a place to “test new ideas and projects, incubate them and promote good practices in Hungary”, adds Levente Erős, a social entrepreneur and another of the five co-founders of the Budapest-based cooperative.

Cargonomia connects sustainable food production with the promotion of low-carbon transport solutions and advocacy for bicycle use. Every year, it organizes about 50 workshops for academics, children or the general public on topics ranging from sustainability and up-cycling to local food production, degrowth and the solidarity and circular economy. The cooperative shares its space with various like-minded, low-tech initiatives such as repair cafes and sewing workshops.

“When we started, one of our goals was to connect these pre-existing social initiatives” says Orsolya Lazányi, another co-founder of Cargonomia who is currently pursuing a PhD in ecological economics. She points out that the original idea for the venture came out of a conversation held, one night, on Budapest’s Liberty Bridge, when the future team members were seeking ways to simultaneously address different needs. The collective was eventually formed in 2015 by this group of friends from France, the United States and Hungary.

Rethinking our impact on the environment

Cargonomia’s work is based on the values of sustainability, fair trade and reciprocity. There’s no fixed hierarchy and official team planning meetings are only scheduled when they deem them necessary. It’s a volunteer-based structure, with all of its members earning their income from other occupations, as diverse as their own background (academia, garden workers, teaching, logistics, consulting, etc.).

While bike messengers come and go, parking their cargobikes – bicycles with a flat loading space suitable for deliveries – in the spacious yard, Margaux sits inside on an old sofa in the adjacent room. Along with some fellow engineers, she’s reflecting on iconic items, totems of the developed and globalized world such as IKEA furniture: Do we really need them? How could we minimize their environmental impact? These students are doing an internship under the guidance of Vincent Liegey, a French engineer who also co-founded Cargonomia.

Levente, a logistics expert, is back on the premises to be questioned by Margaux’s colleagues on the nature of an engineer’s role. “I studied to be an engineer but realized I couldn’t be one. I became a bike messenger after a break-up and started my own company. I created a managing system used by 3-4 companies in Budapest”, he tells the interns.

Levente used to employ bike messengers through his own company, currently known as Aranykerék, which is headquartered in the same building. It eventually became an essential part of Cargonomia, an open collective that cultivates close and well-established bonds with its partners. The collective also includes Zsámboki Biokert, an organic farm 50 km outside Budapest, and Cyclonomia, a cooperative bike workshop that also designs and manufactures cargobikes.

Degrowth on a local scale

Cargonomia’s backbone are the weekly deliveries of boxes from Zsámboki Biokert to locations in Budapest. According to the cooperative, Cargonomia supports a system which supplies more than 3,000 food boxes per year. Its bicycle couriers cover nearly 18,000 km every year, delivering goods throughout a territory of 27 km² of the city.

At the heart of Cargonomia’s initiative lies the concept of degrowth – questioning unlimited economic growth considering the finite and limited resources of our planet. With multiple academics on-board, it alternatively works as a degrowth experiment center which regularly hosts engineers and young scholars to participate in the collective’s daily activities. It helps inspire young engineers (among others) to rethink their future work towards less productivism. “Before, I thought I would finish my research and find a job, like anybody else. Now, after these two months at Cargonomia, I ask myself a lot of questions,” admits Nils, one of the French interns.

Some of Cargonomia’s results are tangible (greenhouse gas emissions avoided with bicycle deliveries, healthier diets, connecting the city to the countryside…), but a lot of their social impact isn’t reflected in the data. “As a messenger on your cargo bike, you say hello, you smile, you keep a personal relationship with the street. People see these weird bikes and they think: What is that?”, reflects Levente. The same feeling drove him to create a social enterprise incubated at Cargonomia, employing people suffering from autism and Asperger’s syndrome to deliver goods, either on foot or by public transportation.

Another good example of experimenting in line with the spirit of degrowth is the community’s cargobike-sharing system launched in March 2018. The donation-funded system allows citizens and residents to share and borrow cargobikes and bike trailers. Promoting and increasing access to this sustainable transportation tool was always one of the main goals of the collective, Orsolya explains: “We also wanted to have a cargobike hub where people could get advice and try them out. At the time, very few people knew what a cargobike was.”

Vincent Liegey notes that, “in Budapest, and in Hungary in general, you can find a lot of very creative, low-scale projects which are not so much connected to each other”, adding: “We simply tried to put them together. We did things step by step, built on experiments that existed and we knew worked in Budapest.”

Looming threats on the horizon

However, almost 30 years after the fall of communism, the Hungarian capital is currently “catching up” with market forces such as skyrocketing rents, while salaries are only slightly on the rise – Cargonomia’s rent alone has doubled in five years.

“Budapest was a much more dynamic and freer city when we started”, remembers Vincent. “We could function with hardly any money, relying only on our network and shared cultural capital. Around us, there were a lot of people working like that, the city was a paradise for non-profit oriented cooperatives and creativity, but it’s less and less the case now, as Budapest has entered a phase of commodification. A lot of the partners involved in the Fifth International Degrowth Conference, held in Budapest in 2016 and coordinated by members of Cargonomia’s team, have disappeared: they’ve lost their spaces, went abroad or accepted jobs in multinational companies and had no time left”.

Collaboration with local authorities has also proved quite difficult. Although a lot of these complications has to do with bureaucracy, as Orsolya indicates, diverging philosophies and dealing with Hungarian officials who are not exactly well-versed in working hand-in-hand with the civil sector might also be part of the problem. “They are interested in what we do but can’t offer much to empower us in return. It’s not a worthy investment of our time to chase them”, confirms Logan.

From municipal officials to local residents: connecting the dots

With one notable exception. With the support of the green-left mayor Gergely Karácsony, Cargonomia has been involved in the development of an agro-forestry site in the 14th district of Budapest, an open space that used to be an illegal parking lot. “We had thought of planting trees since we are engaged in reducing our impact on climate change. The results are beautiful trees that are growing and building the community: local residents come to water and take care of the trees” explains Rebeka Szabó, green-left deputy mayor of the 14th district who has been an ally of the collective ever since its foundation.

An elderly woman who lives in a house at the corner praises the new garden: “It’s a good idea to plant so many fruit trees. But if we were not here to water them, they would have died a long time ago!”, she says, standing between two plum trees and apparently happy and proud to, also, have a role to play. Although Cargonomia has volunteers to water the trees, it always helps when local residents feel responsible.

Budapest seems far away from Zsámbok, a small village of the fertile Great Plain, 50 km away from the capital. That’s where Zsámboki Biokert, an organic garden established by Matthew Hayes, is located, from which Cargonomia distributes vegetable boxes and where it employs about 10 local residents.

They choose to apply bio-dynamic principles and use a horse for cultivation. “We learn from Matthew and he also learns from us, says Katalin Bangó, a local resident from the Roma community and member of the gardening team. “For instance, before, I wasn’t too familiar with eggplants, but now I like them a lot. Growing organically requires a bit of work, for sure, but the vegetables have an incredible taste. And I’m happy we can share that with the people in the city and get it delivered by bike!”

The future hangs in the balance

Marianne Court is also glad to receive these healthy veggies. She has subscribed to the weekly basket for four years. Every week, she places her order on Cargonomia’s website and chooses between a small and a big basket (€12/20). “It’s always a pleasure to meet people from the community when I come on Thursdays to Cargonomia’s offices to pick up my basket, as I live nearby”. She does it for environmental reasons, to avoid “unwanted pesticides”, but Zsámbok’s veggies also allow her to be creative, forcing her “to find new recipes and (re)discover vegetables, such as Jerusalem artichokes.”

Could Cargonomia be scaled up, and should it be? Its founders appear divided on the issue, revealing certain differences of opinion on how to deal with capitalism and its alternatives. “Right now, we know almost everyone, including the people who come to pick up the vegetables… The goal would be to replicate Cargonomia, rather than to upscale it. But it’s hard to find people able to organize themselves, like us, with enough ability and capacity to dedicate to the cause…”, concludes Orsolya.

Hélène is a multilingual (photo)journalist focused on writing about the ‘unknown and little known’. French-born, fluent in Polish and Hungarian, she has been working as a Central European-Budapest based correspondent for French and English-language media since 2010 (including The New York Times and Le Figaro).

Learn more about Cargonomia and support their work!