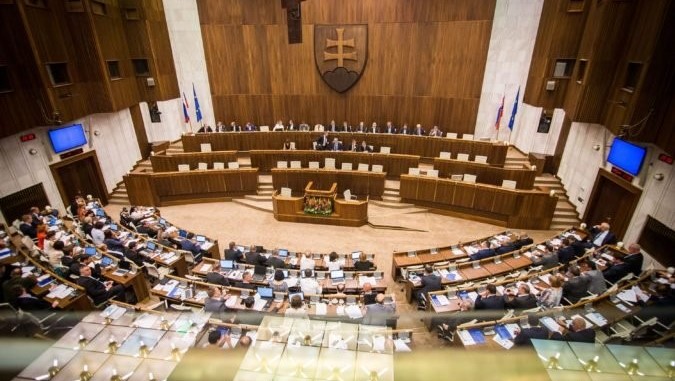 Bratislava, Slovakia – On Monday, the Slovak parliament passed a new law restricting the publication of opinion polls and voting preferences surveys ahead of elections in a move critics say might considerably restrict citizens’ rights.

According to the new proposal, the publication of opinion polls will be banned up to 50 days before elections, compared to 14 days until now. Conducting surveys will not be banned in itself, but should only be made available to political parties that commissioned them, according to the bill.

This law extending the moratorium on election polls was proposed by the ruling Smer party and the Slovak National Party (SNS), and was backed by the neo-fascist opposition party LSNS. Junior coalition partner Most-Hid of Bela Bugar voted against the bill.

Until now, opinion polls couldn’t be published 14 days before the elections. But the new law, which extends this period to 50 days, has sparked concerns among several politicians and voters.

Imposing such a blackout ahead of elections is common practice in democracies all around the world, in order not to influence indecisive voters at the last minute with more or less reliable polls. But Slovakia’s potential new 50-day moratorium would be the longest in Europe and third longest in the world, behind only Cameroon and Tunisia, according to Reuters.

According to the authors of the proposal, voting preferences surveys were heavily influenced by political parties, who often commissioned and issued them themselves in order to sway indecisive voters. This led, according to the law’s proponents, to huge differences in polling predictions and only added to the confusion of potential voters, who became in turn more vulnerable to disinformation and fake news.

“We believe that this law won’t restrict voters’ right to access information, as it’s in fact been designed to protect voters from disinformation and purpose-built information”, reads a report accompanying the new bill, which states that voters should be more focused on voting based on parties’ political programs rather than last-minute surveys.

A new law “against the basic rights of citizens”

Opposition parties and independent MP’s immediately cried foul, some hoping for the constitutional court to step in and review the new legislation. Making such an important change only a few months before the upcoming 2020 parliamentary elections appears, at best, shady, and at worst, utterly undemocratic for many observers.

According to its critics, the new amendment seriously undermines the citizens’ right to information on the grounds of some misguided view of voters’ alleged inability to make informed decisions.

According to independent lawmaker Katarína Cséfalvayová, implementing a 50-day moratorium is unacceptable a few months before critical elections. “Any sort of ban on the publication of opinion polls goes against the basic rights of the citizen’s rights for information… It would be excusable if it were necessary to protect the rights and freedoms of others. But in the age of hybrid dangers, this sort of law just leaves the door open to conspiracies, extremists, propaganda and fake news” she said.

Cséfalvayová, along with other opposition MP’s, said they hoped for President Zuzana Caputova to veto the bill, a move that could potentially block Parliament from approving the measure before next year’s election.

According to sociologists at the Slovak Academy of Sciences, the law is a “violation of the freedom of speech that gives unfair advantage to political parties – that would still be able to order opinion polls without publishing them”.

Other commentators have pointed out that the law is strangely shortsighted and could prove hard to implement in practice.

Even if the publication of opinion polls were to be banned 50 days before the elections in Slovakia, they will still be able to be published in foreign media, including in the Czech Republic. Due to the abundance of Czech media sources in Slovakia and the mutual intelligibility between both languages, Slovak voters would easily have access to those opinion polls.

Moreover, political parties that commissioned opinion polls could quite easily leak the results if they could boost their chances on election day, according to some analysts.

The end of ‘independent candidates’?

The law also includes a number of other changes. For instance, the list presenting the different candidates won’t contain specific information anymore (such as the name of candidates’ employer or company) in order, according to the government, to keep candidates from using the election ballot as an advertisement tool for civic associations or other organizations they work with.

This is the second bill passed by the ruling Smer party in recent months in an apparent attempt to change the rules of the elections ahead of next year’s ballot: in June, the Slovak Parliament passed a law to reform campaign financing rules which analysts believe is meant to stifle smaller opposition parties.